A team of eleven Stroud Masters swimmers travelled the short distance to GL1 in Gloucester to compete in the annual open meet held by Gloucester Masters SC. 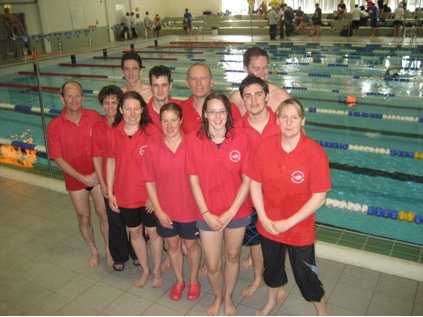 A team of eleven Stroud Masters swimmers travelled the short distance to GL1 in Gloucester to compete in the annual open meet held by Gloucester Masters SC.

Busiest swimmer of the day was Geoff Twinning who competed in five events and took away two gold medals. This was matched by Joe Lewis who also took away two golds and produced an outstanding performance in the 100m backstroke to achieve a personal best time of over two seconds. Kerrie Aldridge and Mark Partridge were rewarded for strong swims in a range of events, each achieving 3 gold medals, whilst Jessica Wooddisse and Lorraine Savagar both took away a gold medal as well as a silver and bronze medal respectively. Wooddisse won her gold with an impressive performance in a very competitive womenÃs 400m freestyle whilst posting a personal best time of three seconds. Silver and bronze medals were won by Scott Nelson, Will Lee and Elaine Lewis. Like Nelson, Jo Green was swimming competitively for the Club for the first time in 2012, and along with fellow team mate Lewis Saunders put in good performances and were both rewarded with a number of new age-group personal best times.

Overall this was a great performance by the team who between them took away twelve gold, nine silver and three bronze medals, as well as numerous personal best times. The meet marked the end of the short course pool competition programme until the autumn. Over the coming months the focus of the team will be swimming the longer distances of open water events with the highlight being the World Masters Swimming Championships in Italy in June.